A Brief History of Lancaster County

For hundreds of years, the Catawba Indians occupied what became organized as Lancaster County as part of their historic tribal lands. The Siouan-speaking Catawba were once considered one of the most powerful Southeastern tribes. The Catawba and other Siouan peoples are believed to have emerged and coalesced as individual tribes in the Southeast. Primarily sedentary, cultivating their own crops, the Catawba were friendly toward the early European colonists.

When the first Anglo-Europeans reached this area in the early 1750s, they settled between Rum Creek and Twelve Mile Creek. Waxhaw Creek within this area was named after the Waxhaw Indian tribe that was prominent in the region. The majority of the new settlers were Scots-Irish who had migrated from Pennsylvania, where they had landed in Philadelphia. Other Scots-Irish from the backcountry of North Carolina and Virginia joined them.

A second settlement was made in the lower part of the present Lancaster County on Hanging Rock Creek. The South Carolina colony first made a grant to settlers there in 1752; it included the overhanging mass of rock for which the creek was named. About the time the colony opened up this section, other settlers came in and settled along Lynches Creek, Little Lynches creek, Flat Creek, Beaver Creek, and lower Camp Creek. In coming to the Lancaster area, the first settlers followed old Indian paths. The increased traffic began to enlarge the paths and improve them as dirt roads.

The Rocky River Road was also based on an Indian path. During the American Revolutionary War, Colonel Abraham Buford and his forces fled from Tarleton along this road. He was overtaken a few miles south of the North Carolina state line, where the Patriot forces were defeated in the Battle of Waxhaws. Locals call it Bufords Massacre. Today, the Rocky River Road has been absorbed by part of South Carolina Highway 522, which was constructed following the old thoroughfare very closely.

The area abounds with landmarks of historical significance. The following are just some of these landmarks:

The Lancaster County Seal is unique because it is different than most official seals in other governing bodies. It was designed by Joseph Croxton in 1973.

The irregular shape of Lancaster County itself is used for the field of the seal. The red, white, and blue of the field represent our nation’s colors and are in honor of all those brave and patriotic citizens of Lancaster County who gave their lives in the defense of their homes and country, and who may be called upon to do so in the future. 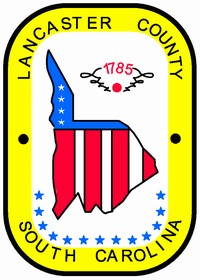 The four white stars on the blue field symbolize the original four counties. Prior to 1767, the province of South Carolina, one of the original 13 colonies, was divided into four counties: Craven, Berkeley, Colleton, and Granville. Present day Lancaster County was located in Craven County. In 1768, South Carolina was divided into seven judicial districts with Lancaster being placed in the Camden district. On March 12, 1785, Lancaster County officially was born when the seven judicial districts were divided into counties. Camden District was divided into seven counties: Lancaster, York, Chester, Richland, Fairfield, Claremont, and Clarendon.

The 13 blue stars at the base of the shield symbolize that Lancaster County was part of the original 13 American Colonies.

Geologically, Lancaster County lies over a great slab of granite. The field or shape of the County is shown raised by shading on the right side to impart a third dimension or thickness. The color of the shading symbolizes that the field was cut from a slab of native granite.

In the upper right of the shield, the red rose of Lancaster, England, is shown, not as a dominant feature, but to symbolize the County’s history from its origin when our ancestors and original settlers migrated from this area of England to America and to South Carolina.

The scrolls of gold cord intertwining and rising on each side to support the date of our County’s birth (1785) symbolizes the nearly 400 years of history form the first Lancaster of England which was created in 1399 by the ruling family of England. The House of Lancaster, founded by King Henry IV, to the birth of Lancaster County, South Carolina in 1785.

The shape of the shield is a modified lozenge, with a white background. The border of gold symbolizes that Lancaster County was an important producer of gold from 1827-1942. The Haile Gold Mine alone has yielded gold with a total value of more that $7 million. At one time, it was the largest gold mine east of the Mississippi River. Over the gold border, black letters, Lancaster County, South Carolina are shown in the colonial style to implement the historical theme of the design. The blue outer border is used to frame the seal.